"This is the voice of the Mysterons!

"We know that you can hear us, Earthmen.

"Our revenge for your aggression on the planet Mars will continue with the complete disruption of the world shopping community for 24 hours. Innocent people will be turned into mindless zombies fighting their fellow man for control of the best deals! 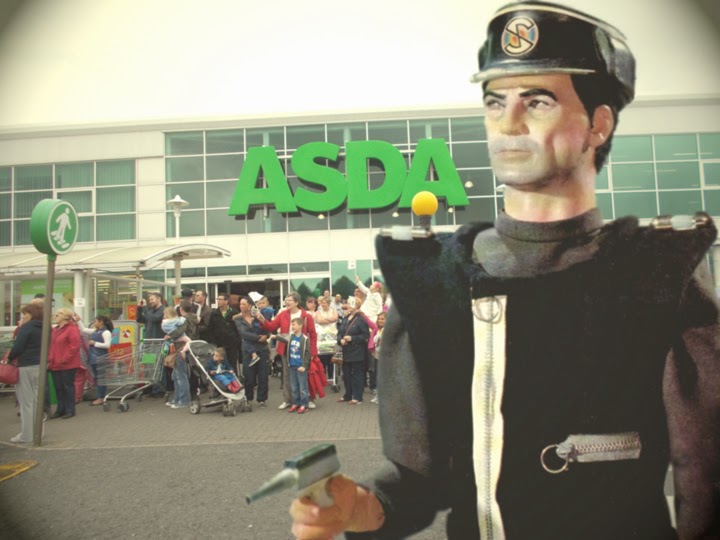 Posted by Andrew-Mark Thompson at 12:40 No comments:

Crossroads - The Movie - Direct to Video! Back in the early eighties, ITC had a habit of joining episodes of its successful TV shows together and marketing them as movies to TV stations too stingy to fork out for the full series.

Titles like 'Journey Through the Black Sun', 'The Incredible Voyage of Stingray' and 'The Amazing Adventures of Joe 90' soon found their way onto the fledgling VHS rental market via the label 'Precision Home Video'.

I still have a copy of 'London Conspiracy' - two episodes of 'The Persuaders!' shamelessly bolted together and displaying a complete disregard for the title by not having any scenes set in the British capital! Uniquely, these tapes came in robust music-cassette style plastic boxes and like their audio counterparts, easily broke and became very scuffed and filthy looking as the years went on.

ITC attempted to create a movie from its popular soap opera 'Crossroads'. A selection of episodes chronicling the fire at the motel that resulted in the sad departure of Noele Gordon were edited together into an hour and half mini-epic. Additional scenes set at an inquiry into the fire at the Birmingham coroner's office were filmed with actors Geoffrey Keen, Shane Rimmer and Nina Baden-Semper were added to cover the joins and an additional scene which changed the storyline was filmed with Jane Rossington weeping at the graveside of her dead mum. (The latter had originally been passed off as a hoax by the press!) There we also some extra effects scenes spliced in from 'The Medusa Touch'. It was a bit of a mess really and very few broadcasters took up the option on it.

I hear that it was broadcast once in Singapore.

Posted by Andrew-Mark Thompson at 15:04 No comments:

British Comedy Bestsellers of the Seventies

The life of a best-selling author in the 70s was dreadful. The books they wrote only cost about 20p each from WHSmith and train stations and that wasn't enough to keep their pet cats in fish heads for a week.

So all the authors had to supplement their meagre income by penning novelisations of movies. Isaac Asimov did it for 'Fantastic Voyage' in the 60s.

These authors produced some adaptations of the cream of British movie comedy in the following decade. Everyone a classic! 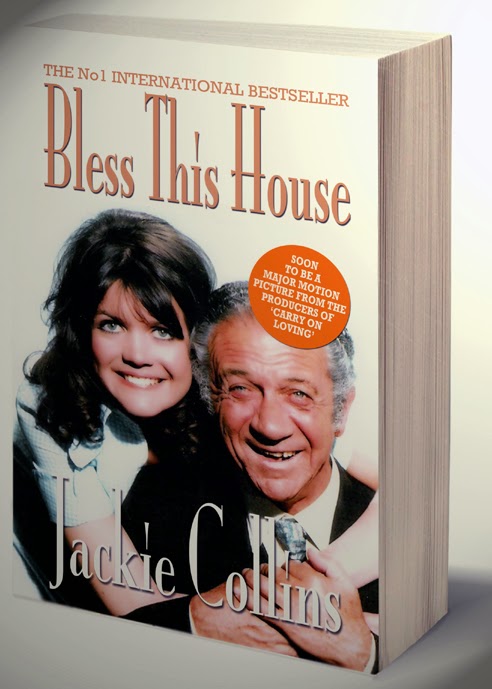 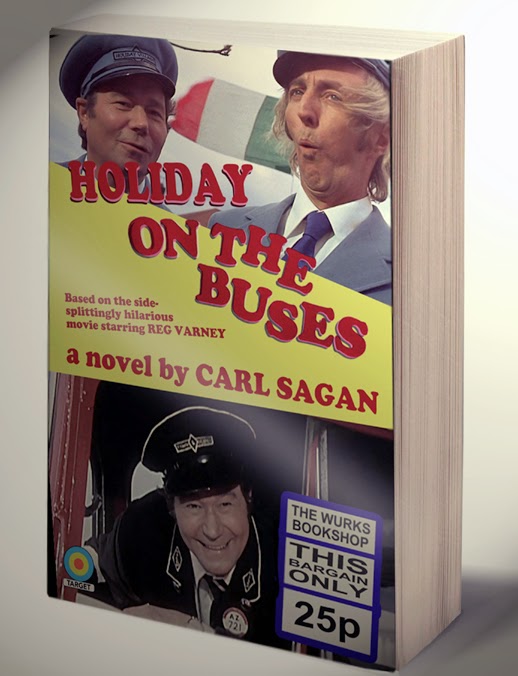 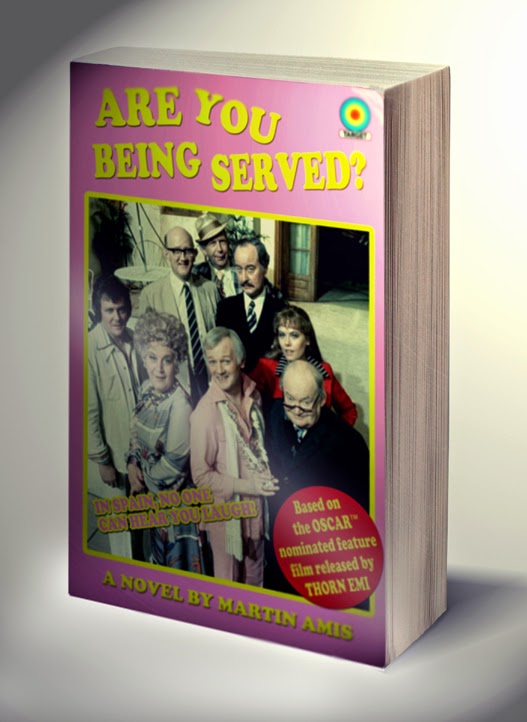 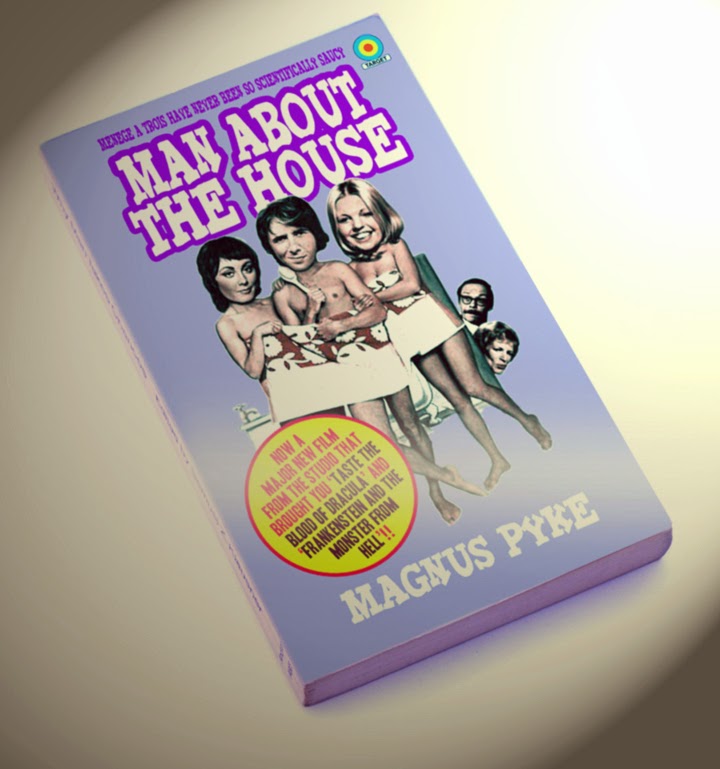 Posted by Andrew-Mark Thompson at 23:54 No comments:

Email ThisBlogThis!Share to TwitterShare to FacebookShare to Pinterest
Labels: A bit silly, Are You Being Served?, Bless this House, Carl Sagan, Classic TV, Fake Merchandise, Humour, Jackie Collins, Magnus Pyke, Man About the House, Martin Amis, On the Buses

Target - The Series It Once Was! 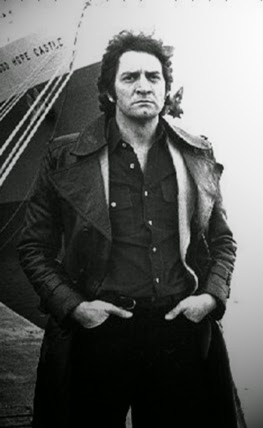 After completing his third series of 'Doctor Who' in 1977, producer Philip Hinchcliffe was asked by his bosses to swap producer roles with Graham Williams. Williams had been developing a new police series entitled 'Hackett' that would be the BBC's answer to ITV's 'The Sweeney'.

The series – under Hinchcliffe – evolved into 'Target' starring 70s medallion man Patrick Mower as Det.Sup. Steve Hackett – lead copper of a team dedicated to bringing down untouchable criminals in Southampton (!). His co-stars were Brendan Price as Bonny, Vivien Heilborn as Louise and Philip Madoc as his boss, Det.Chief.Sup.Tate.

The series was grim. It was widely criticised for its violence and although it went to a second series, the final episodes were noticeably toned down.

As part of its special event 'Philip Hinchcliffe in Conversation', QUAD in Derby will be screening the third episode of the first run. Entitled 'Big Elephant', it sees Hackett and his team searching for a merchant seaman who is unaware that hash he has stolen is actually a quarter of a million pounds worth of heroin. 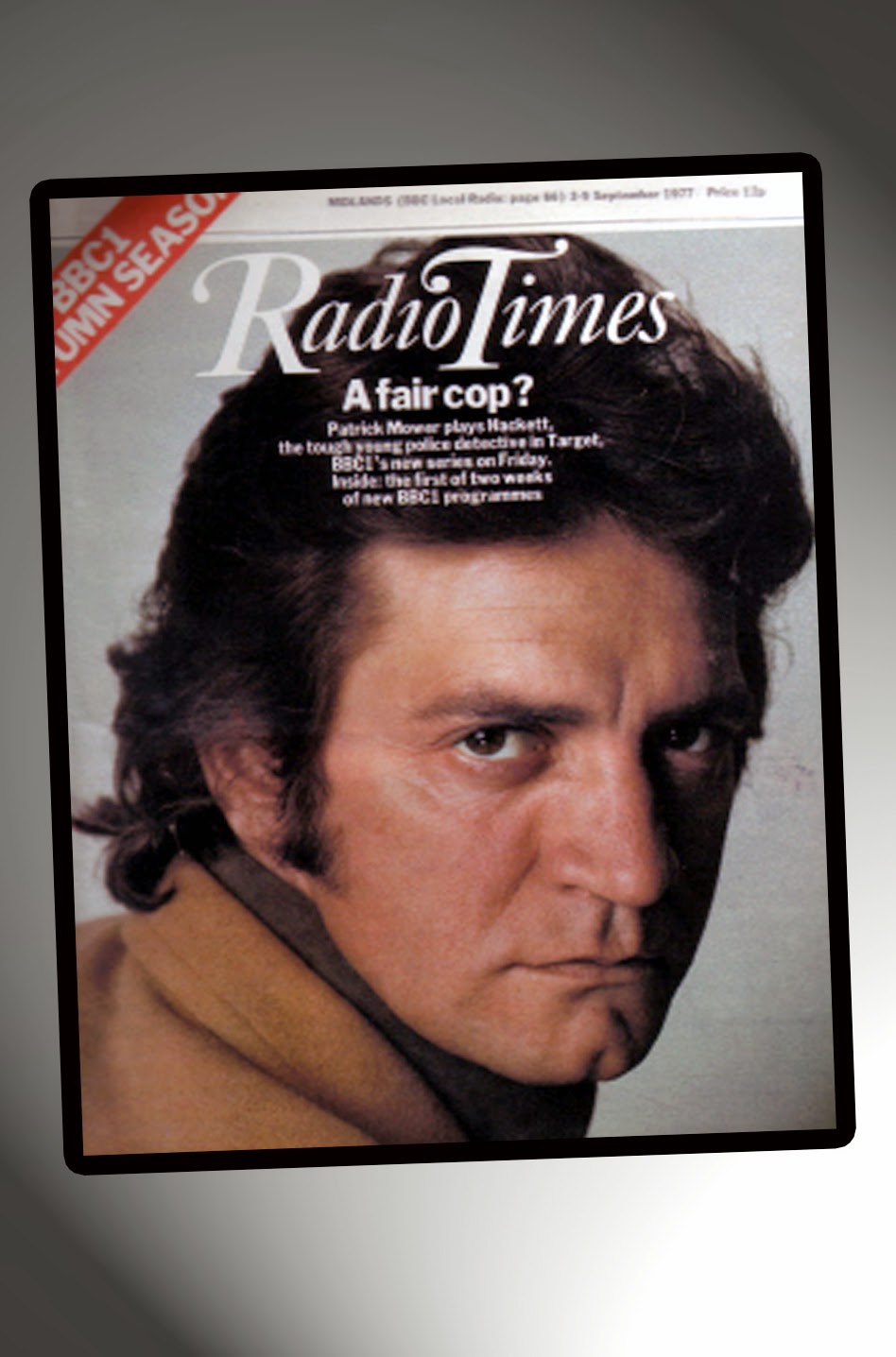 The episode has many connections with 'Doctor Who' and the following list of ten is by no means exhaustive.

- 'Big Elephant' is written by Bob Baker and Dave Martin – known to the 'Doctor Who' production office as the Bristol Boys, they were 'discovered by the series' script editor – Terrance Dicks – in the early seventies when he commissioned them to pen 'The Claws of Axos' for Jon Pertwee's Doctor. They went on to script three of 'Target's first series and the opener for the second.

- Like the Bristol Boys, director Douglas Camfield cut his teeth on 'Doctor Who'. Having worked as a Floor Manager on the very first episode, he had graduated to a full-blown director by the show's second year. He directed more episodes of the original series than any other including the whole of the mammoth 12-part 'Daleks' Master Plan' and the 8-part 'The Invasion' which featured the debut of UNIT.

- Joanne – the heroin addict – is played by Katy Manning – famous for her role as the loveable and loyal Jo Grant during the bulk of Jon Pertwee's time on the series. It's a massive departure for Manning and a strong performance and characterisation that the actress is still proud of today.

- Series regulars Philip Madoc and Brendan Price are both no strangers to 'Doctor Who'. By the time of 'Target', the acclaimed Welsh actor Philip Madoc had amassed three major guest starring roles in the show and would go on to make another in 1978. He also pops up in the second 'Doctor Who' movie as a typically shady character. One of Brendan Price's earliest TV roles was the previous year in 'Doctor Who's 'The Face of Evil' where he played Tomas – a close friend of future companion, Leela.

- Playing the main villain – Cetti - in 'Big Elephant' is Walter Randall. Randall was one of Douglas Camfield's repertory company of actors who pop up in many of his TV productions. Randall is particularly familiar to Who fans as the equally sadistic El Akir in 'The Crusades' and as the hapless technician who is the first to turn into a Primord in 'Inferno'. Both of these performances were under Camfield's direction.

- Driving the London taxi in the later half of the episode is Derek Martin – who was months away from his ground-breaking role in GF Newman's 'Law & Order'. He appears in many 'Doctor Who' stories from the first ten years of the show usually as part of the Havoc stunt team. He's the first soldier to spot the Yeti when they attack the army in Covent Garden's market in 'The Web of Fear'. He later achieved more widespread fame as taxi driver (coincidence?) Charlie Slater in 'EastEnders'

- The theme and incidental music for 'Target' are by Dudley Simpson. Simpson had first worked on 'Doctor Who' in 1964 as composer for 'Planet of Giants' – the last episode of which was also Douglas Camfield's directorial debut. For 'Target's theme music, he provides a strident brass-led action piece that accompanies.........

- …....Sid Sutton's title sequence which uses rota scoping animation of two men in pursuit over a warehouse roof. The simplified effect is familiar to anyone who remembers a certain ground-breaking Jackson Five music video from around the same period. Sutton would go on to create the title sequences for Tom Baker's final season in the role of the Doctor as well as modified ones for Peter Davison and Colin Baker.

- Fred Hamilton was 'Target's film cameraman. Hamilton worked on the 'Doctor Who' series on-and-off for many years and it was he who was responsible for the camera work on 'Spearhead from Space' – the only adventure to be shot entirely on film.

- The designer of 'Big Elephant' was John Hurst. He had already performed the same job on 'Planet of the Daleks' for Jon Pertwee's 'Doctor Who' and would go on to design 'The Caves of Androzani' for Douglas Camfield's former colleague and protégée Graeme Harper in 1984. He would also become a mainstay of 'Target's BBC descendants 'Shoestring' and 'Bergerac'.


Watching 'Target' again, one is struck by the dialogue which is gritty to the point that it becomes almost parody. 'Big Elephant' seems to use every conceivable slang term for 'cannabis' and 'heroin' that was available in the late seventies. 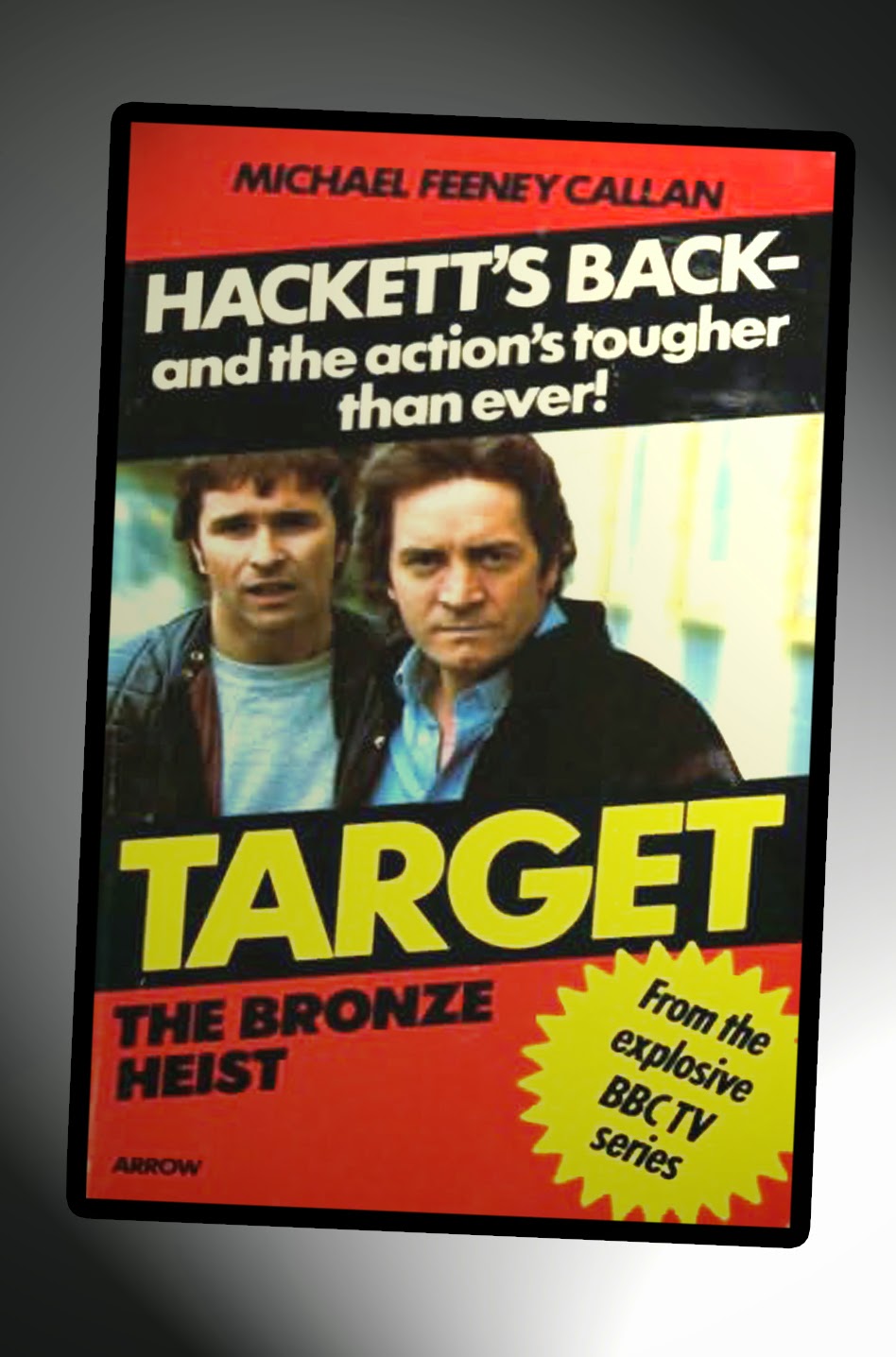 “We've gotta score tonight, Des. We got to!”

“Right Louise, get ya knickers on!”

“Part-time whore bag are ya?”

“He's walking about with half a million quids worth of big elephant in his pocket.” (See what they did there.)

“Right. Round the back!”

“Haven't got any Charlie have you?”

“Bonnie. Round the back!”

“What you doing here? You a queen?” “No, but there's a couple in there if you're lookin'”

“You know the longest time I've spent with a woman is seven and a half minutes!”

“Some pig called Cetti! I want you to help me stick him.” 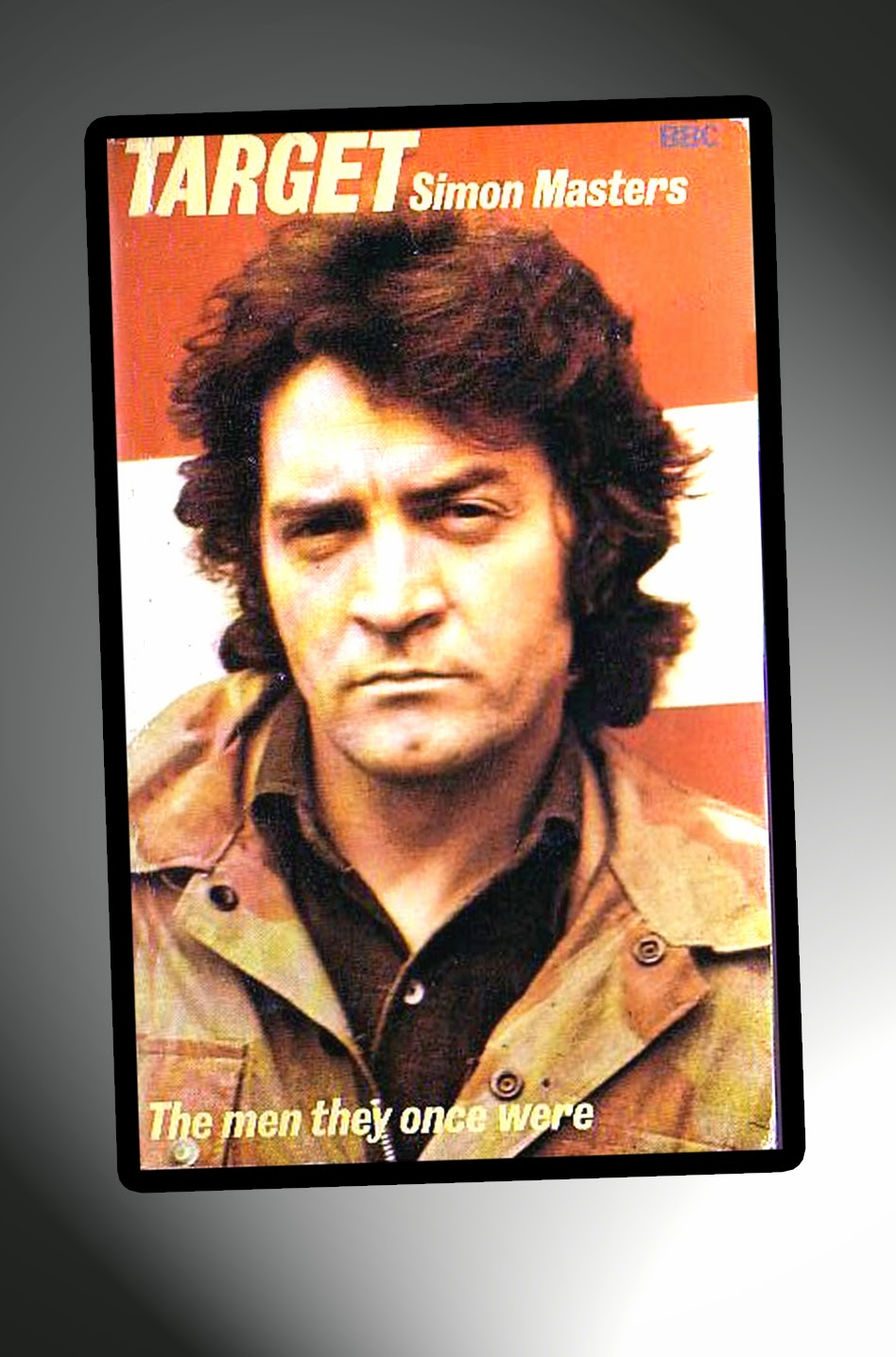 “I would nae have a drink with you, you bastard!”

“This job is worth fifty quid. It's hash. Lebanese.”

“Does anybody want to buy some pot?”

“Frank. Harry. Round the back!”

“Gerroff me, ya square-headed bastards!” 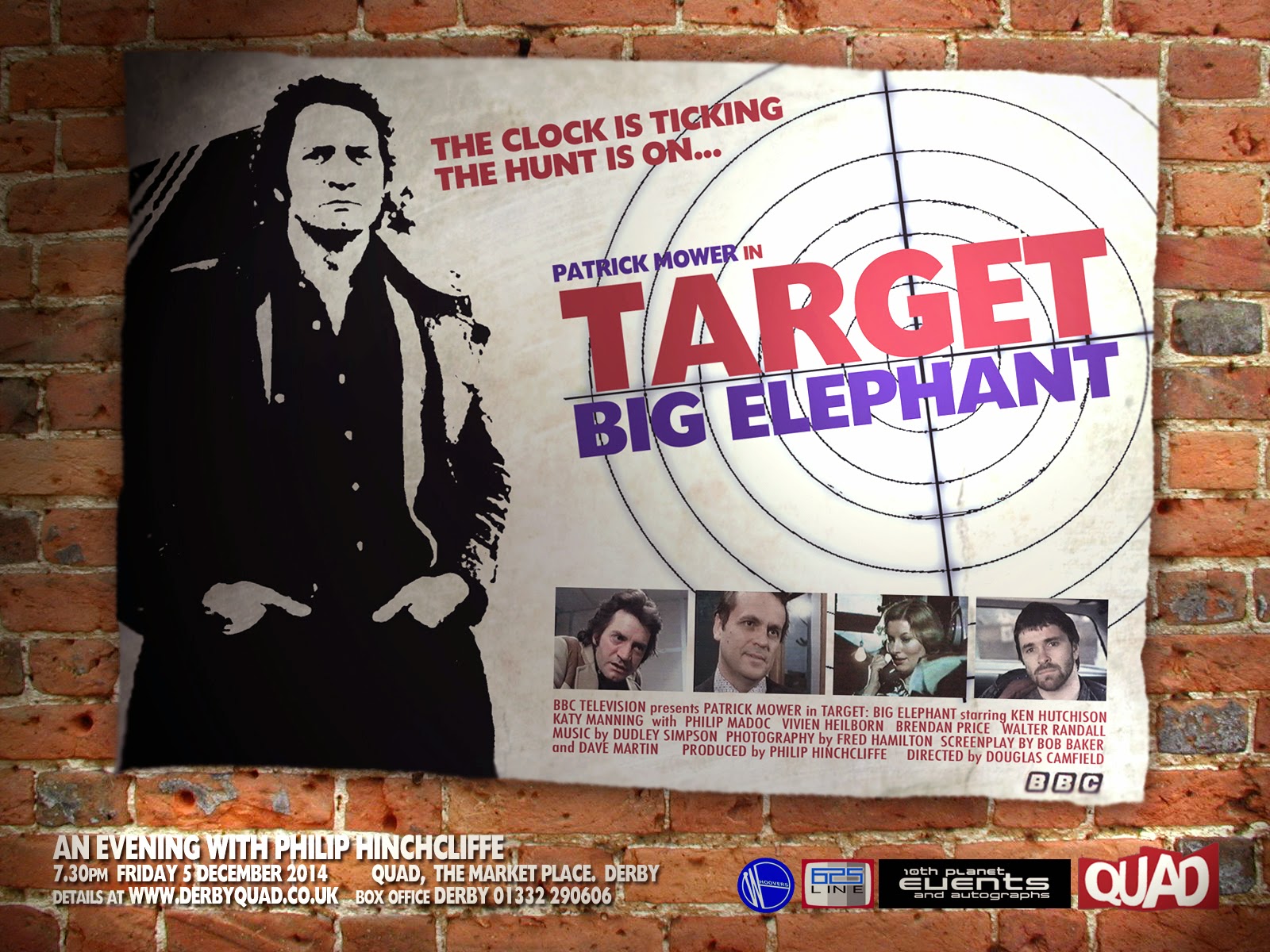 
STOP PRESS: (4/12/2014) Due to unforseen clearance issues involving the whole 'Target' TV series which didn't come to light until late in the day, QUAD are now unable to screen 'Big Elephant'. It will be replaced in the schedule by an episode of the Philip Hinchcliffe-produced 'Private Schulz' which starred Michael Elphick and Ian Richardson.
Posted by Andrew-Mark Thompson at 11:46 No comments: 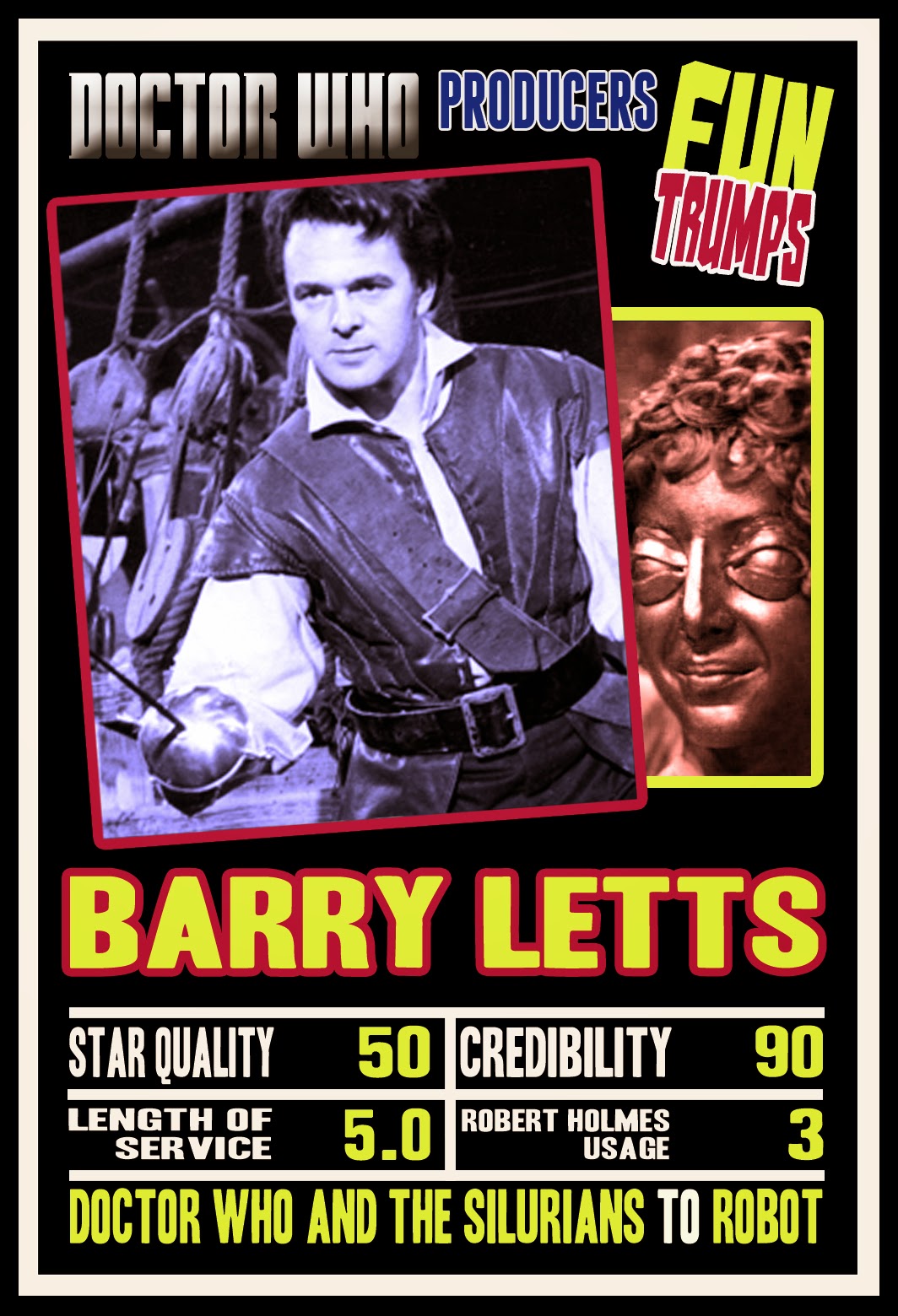 Top Trumps are great aren't they?

Well, I think they are. Especially the ones where the values seem really arbitrary and are just there to make the game fairer for the shitty cards.

I was commissioned by a popular games company - who shall remain nameless but have a 'monopoly' on board games - to produce a set of 'Fun Trumps' (Apparently, TOP Trumps are someone else's property!).

I picked 'Classic Series Doctor Who Producers' as my theme and set about putting them together. I spent over an hour on this and it shows.

And please don't complain to me or the manufacturers about the fact that there's only nine cards in a deck. Blame the BBC for not hiring enough producers.

This wouldn't have happened in the US...

Posted by Andrew-Mark Thompson at 00:18 No comments:

Those Wonderful TVTimes - part one

Like most TV buffs, I have a huge collection of TV and Radio Times and I like nothing more than thumbing through them and recalling the amount of rubbish that was on back when I was a kid.

I thought it would be nice idea to look back at what was on the telly this day in 1973 or something.

Can't be precise as ITV didn't put the bloody year on their listings pages. Idiots...! 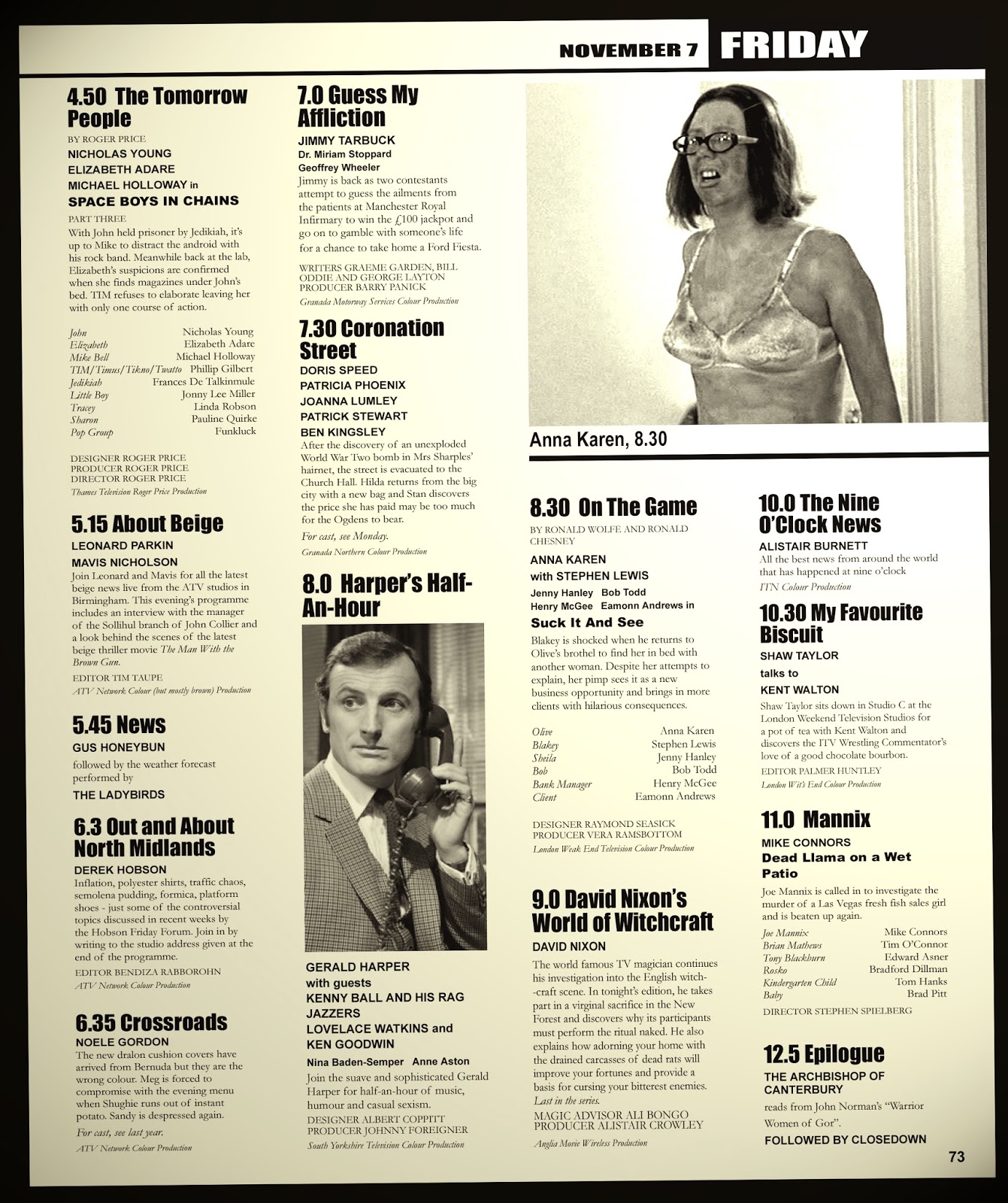 Posted by Andrew-Mark Thompson at 00:01 No comments:

More From Those Robot People of the Planet Skaro 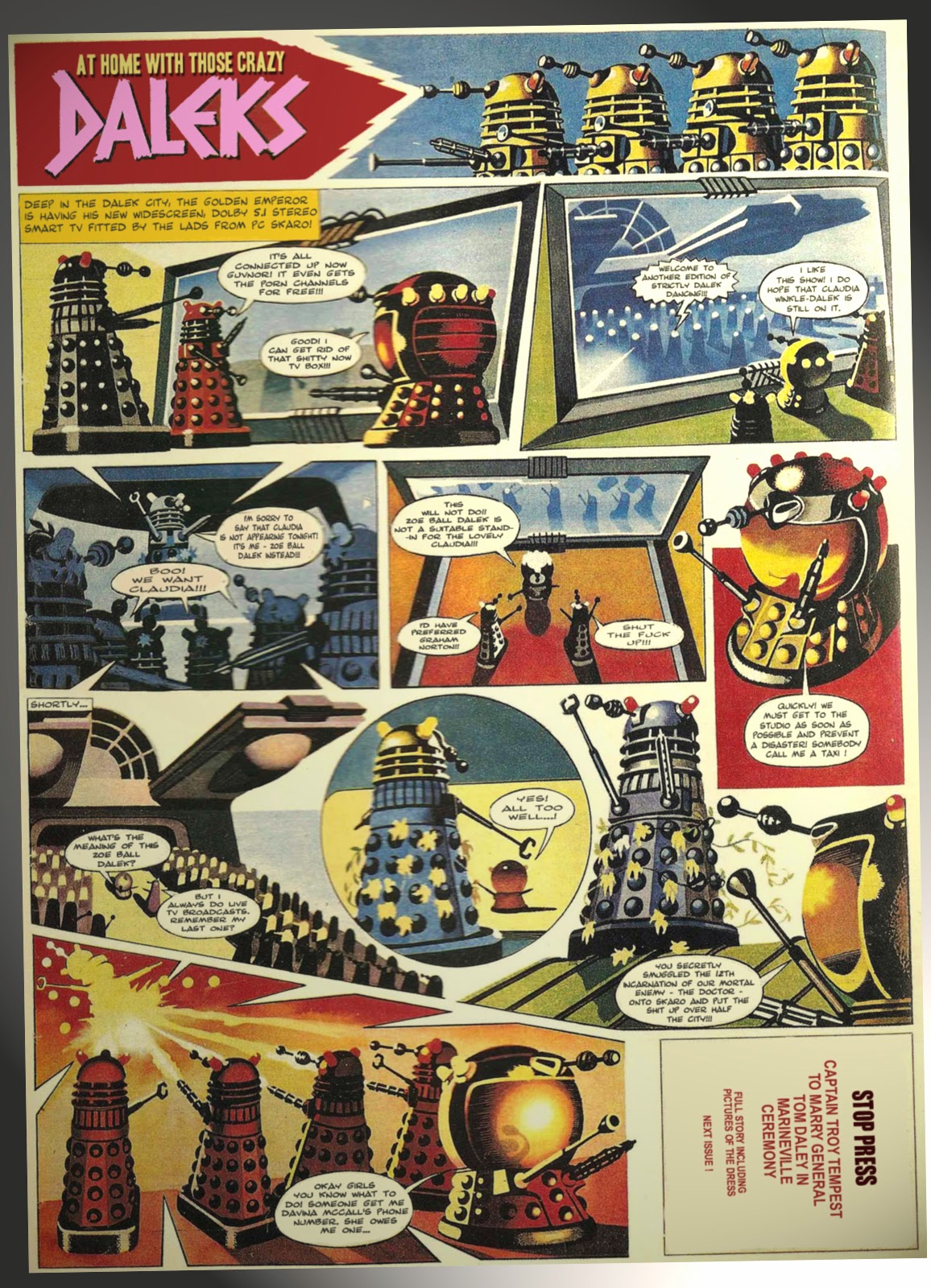 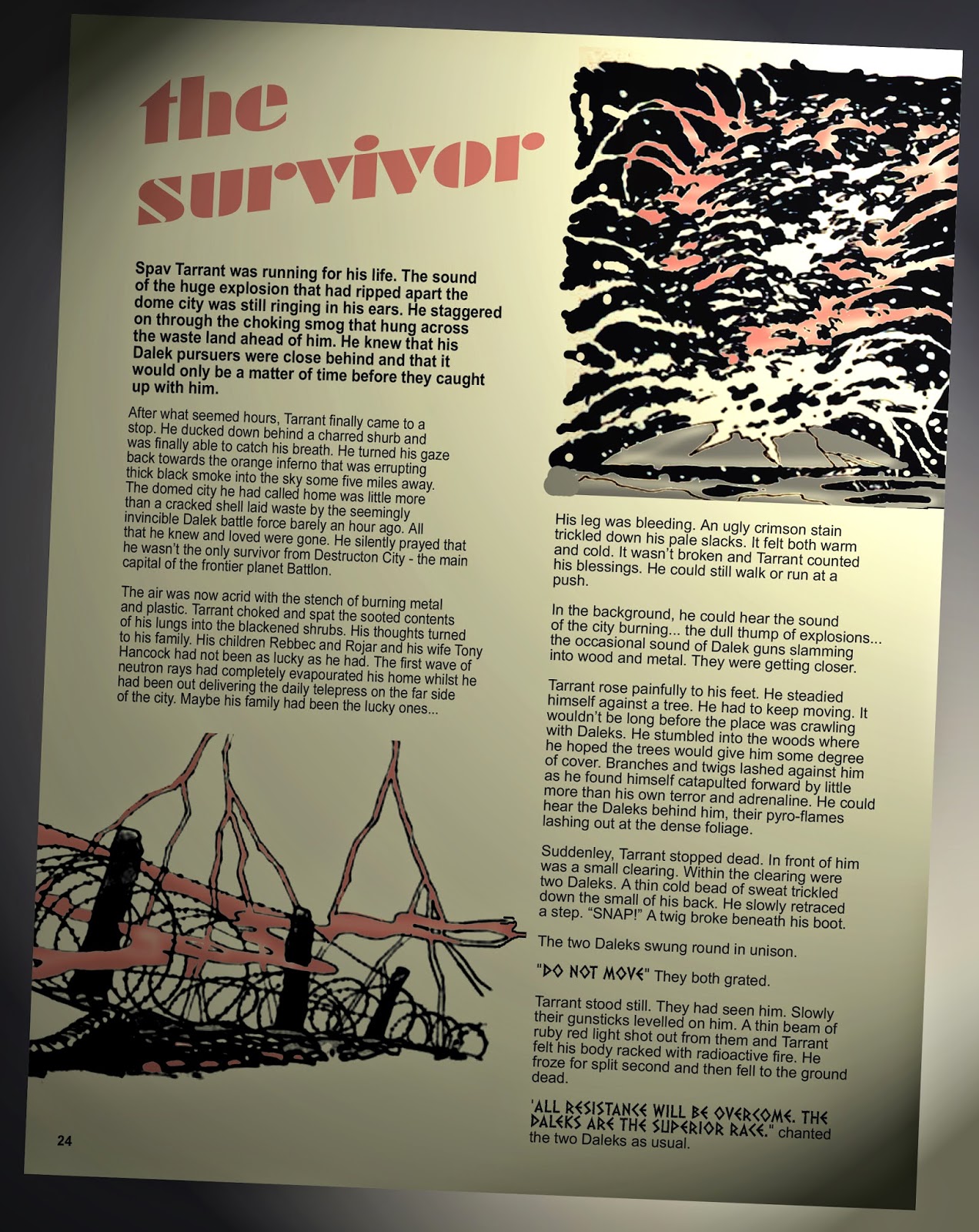 Posted by Andrew-Mark Thompson at 00:20 No comments: